Our new investment opportunity with at least 100% ROI (return on investment) in short-term is Implant Sciences Corp. (IMSC)

Implant Sciences develops and manufactures explosive trace detection sensors and systems that are capable of detecting minute amounts of a wide variety of military, commercial, and homemade explosives. IMSC’s patented technologies  provide unique screening capabilities to extend and improve counter-terrorist and homeland security efforts. Implant Sciences’ products are deployed worldwide to enhance the safety and security of its customers in roles such as:

In this report we’d like to review three major points as a rolling forecast of Implant’s share price: 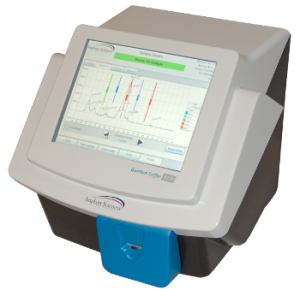 QS-B220 Benchtop Explosives and Narcotics Trace Detector
The QS-B220, introduced in May 2011, is a bench-top explosives and narcotics trace detector that uses Ion Mobility Spectrometry (IMS) to rapidly detect and identify trace amounts of a wide variety of military, commercial, and homemade explosives, plus narcotic substances. The QS-B220 is free from radioactive materials, low total cost of ownership, and high operational availability.

Implant’s innovative explosive trace detection (ETD) devices have significant advantages over market leaders in detection systems space such as Safran’s Morpho Detection products, Smiths Group detectors, L3 Security & Detection Systems and others multi-billion dollar market giants. We’ll look at why we think IMSC’s products are superior to those of competitors in upcoming reports, and why we think this could be big government contracts for this emerging defense company.

An upcoming review of Implant’s Quantum Sniffer ETD by the Transportation Security Administration (TSA) is the key catalyst that could propel IMSC’s share price. The U.S. government spends more money on its military than every other country on the planet – combined. Therefore, there can be no doubt that in the event of TSA certification, Implant Sciences could be the recipient of huge government contracts, causing revenues to jump sharply, which will reflect in a higher price per share in the stock. Impact’s market capitalization could double or even triple within the blink of an eye on an approval vote from the TSA to sell Quantum Sniffer line of products to United States government entities and other public and private groups.

Highly speculative question is: when will we know of the TSA’s decision? Our best guess is that this announcement should come in the second half of August, based on the initial date of TSA review and the typical 6-month duration in certification processes. More importantly, the likelihood of approval is growing by the day. Recent developments from the company evidence this:

Certainly this suggests that Implant anticipates significant growth in orders and is anticipating greater volume. That means only one thing – TSA certification is just around the corner.

3. The Players Behind The Company

Take a quick look at Implant’s financials here. The company has around $35 million in current liabilities of which $27 million belong to the DMRJ Group. DMRJ Group, LLC is a Delaware Limited Liability Company affiliated with Platinum Partners Value Arbitrage Fund L.P., one of the most profitable mid-sized hedge funds known to-date. DMRJ Group has repeatedly extended the credit line and promissory notes’ to Implant and increased the borrowable amount. Thus DMRJ positioned themselves as a long term benefactor in IMSC. DMRJ most definitely is betting on Implant Sciences’s profitable future – that’s a good sign and clear direction for the sophisticated investor to follow the smart money.

Implant’s international market status and it potential; Implant’s products versus competitors in the defense industry; and an analysis of post-approval events will be discussed in subsequent reports.

An investment in IMSC stock today could double in a matter of weeks just on speculations of TSA certification. Afterwards, we predict a huge IMSC share price spike to over $5/share on the actual TSA approval. At $5 — that’s where smart stock market players (like you) should protect their investment and enjoy the future development of Implant Sciences (IMSC) without worries of any potential stock bumps on the road ahead.