This is our early-bird alert on MRI Interventions (MRIC), a company we profiled back in June when it had just emerged in the market. By ‘early-bird’ we mean notice before the stock experiences what we believe will be a big run-up in price. If you weren’t following us earlier this year, we called MRIC at $1.20/share and watched it soar to $5 soon after. 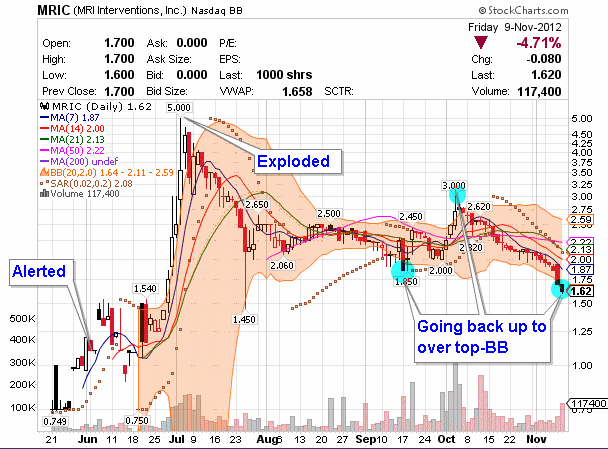 MRIC has been beaten down by short-sellers, though we believe this will now subside. Our sources also indicate that short sellers will be covering their short position next week, and depending on the availability of stock MRIC could see a short squeeze. Short squeezes play an important role in exaggerating the run-up a stock experiences on good news, fundamentals like earnings and other developments in the underlying business. The idea is to get in before shorts scramble to cover their ‘borrowed’ shares.

MRIC is also due to report their third quarter (Q3) results this upcoming week. The stock price of MRIC has NOT factored in any surprises for next week and, therefore, any positive news could create a HUGE spring for shares to leap higher. Here’s what we mean by surprises:

MRIC went public in May of 2012 and saw incredible traction from investors clamouring for its stock because the company has a DISRUPTIVE TECHNOLOGY that is absolutely set to revolutionize the way minimally-invasive brain surgeries are performed. Minimally-invasive brain procedures are performed on patients with diseases like Alzheimer’s, Parkinson’s, OCD, Depression, and other ‘brain’ diseases when drugs or targeted therapies fail to work. MRIC says there are 2.2M STRANDED brain disease patients in the United States ALONE. This drives a BILLION DOLLAR OPPORTUNITY for the company.

What MRIC does is it sells a system that integrates with any make of an MRI scanner and allows for neurosurgeons to actually SEE in REAL-TIME what they’re doing during a SURGERY. Believe it or not, prior to MRIC’s technology, these procedures were done BLIND. A patient has to be awake for their own surgery and respond to the surgeon as he or she asks ‘what you’re feeling when I stick this needle in your brain’. We’re NOT JOKING. 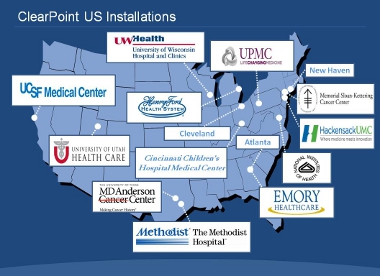 MRIC’s technology, the ClearPoint system, creates REAL-TIME visualization of a patient’s brain during this surgery which means the patient can be under anesthesia when undergoing the procedure. This also simplifies the surgery allowing for neurosurgeons of almost any experience level to perform this task. WITHOUT MRIC’s ClearPoint system, there are only 400 HIGHLY SPECIALIZED neurosurgeons in all of the United States that can perform this task BLIND (without visuals). This makes the surgery VERY expensive for hospitals. Being awake during surgery also makes the surgery very inconvenient and possibly terrifying for patients. MRIC’s ClearPoint solves both of these problems.

These minimally-invasive brain surgeries with MRIC’s ClearPoint cost hospitals a FRACTION of what it costs when performed blind. This is because (1) there are only a few qualified neurosurgeons who can operate blind and (2) operating blind takes far longer as neurosurgeons have to be absolutely SURE (even when they’re doing this blind) that they hit their intended target (but do they really ever know for sure?). MRIC opens the surgery up to 3500 neurosurgeons, which reduces wait times for a scheduled procedure (and potentially saves LIVES) and has been shown to cut procedure time in more than HALF.
Most hospitals are ALREADY equipped with an MRI scanner, so setting up MRIC’s ClearPoint system, that can be integrated into approximately 4500 existing MRI suites in hospitals around the US of a fraction of MRI scanner cost, is like setting up satellite television – it’s done in a mere matter of a few hours.

Here’s the kicker though: MRIC has been penetrating LEADING hospitals in the United States and Europe and is set to report new case studies using their technology and an update regarding a new sales force that they’ve been training since the late summer. The sales force is reportedly performing BETTER THAN EXPECTED and ClearPoint is seeing TRACTION.

The best analogy that we can give to what’s going on is to compare MRIC to a computer. When computers first came out, people accustomed to typewriters were sceptical computers would ever replace their hardware. But if you’re reading this, you’re probably using a computer device (PC, handset, etc.). Computers absolutely took the typewriters by storm. The only place you can find typewriters now are in a museum. MRIC’s ClearPoint is the computer of the brain surgery industry. As a side note ClearPoint was featured on the COVER of Operative Neurosurgery – this is the MOST prestigious medical journal in their INDUSTRY.

So what does all of this mean?

Well, lets crunch some numbers… MRIC makes about $7200 per procedure with a gross margin of 70-80% on disposable products such as “Razor blade” business model adopted by the company (see Kimble Jenkins, CEO of MRI Interventions, interview below ).

Minimally-invasive brain surgery with MRIC’s ClearPoint takes up to 3 hours thus allows to be scheduled twice or even three times per day in one hospital. Do the math and you realize that MRIC’s gross revenue should be close to $4M/annual based on 700 procedures per hospital per year. Even for only 20% of the 124,000 minimally-invasive brain surgery procedures that happen EVERY YEAR in the US with MRIC’s ClearPoint that will be an extra $160M gross income to the MRIC’s balance sheet. Compare this number with the MRIC’s minuscule market capitalization of just above $70M and you will realize that this is a HUGE ROI OPPORTUNITY. Moreover, we don’t even look outside the US market, where the MRI Interventions is partner with a HUGE distribution partner, Brain Lab AG.

When MRIC begins to report their numbers and guides for the next 12 months, investors will value MRIC stock multi-times of what it’s trading today. Their platform spells BIG BUSINESS for a small company. We’re expecting MRIC to trade well this week with the share price going above our conservative $3/share target . Buckle up.