Cellceutix Corporation stock (CTIX) had impressive run from low 80 cents to over $2.40 in a month+. CTIX stock is in overbought condition (that’s obvious) but most important that it is heavily overvalued. 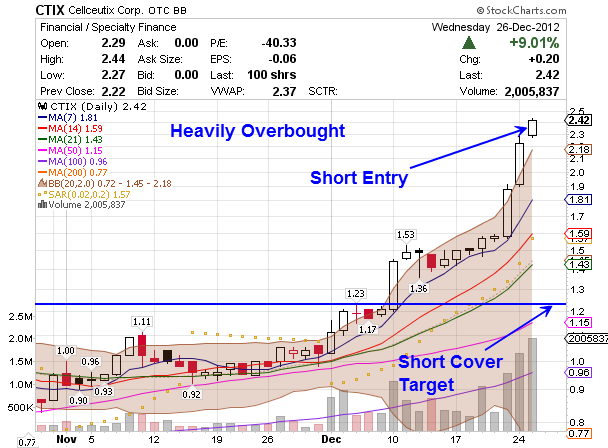 Take a brief look at company’s products and its financials:

Prurisol is a small molecule, acting on the principles of immune modulation and PRINS reduction that has been found to be effective against psoriasis in animal models, both in induced psoriasis as well as a xenograft model with human psoriatic tissue.

CTIX filed the preliminary work necessary for a Phase 2 clinical trial application for Prurisol™ based upon the FDA guidance somewhere in July. As you may aware, Phase 2&3 trials take years until FDA approval (if any). Not to mention huge monetary injections for R&D, clinical & administrative resources. Interesting enough that for the three month ending September 30th, 2012, CTIX spent on Research and Development only $185K versus $114K for officers’ payroll…  That’s really weird for the biotech company that likes to push its products to the market…

Anyway, CTIX’s market capitalization is around $226MM. Kind of unusual forthe  early stage biotech with a few drugs in pipeline… Well, let try to positioning CTIX at psoriasis global market in event if Prurisol™ will be approved:
Psoriasis drug market is slightly above $4B wordwide (which is huge) but highly competitive. Besides the Takeda’s Enbrel, who is market the current market leader, many of the pharma giants have been taken a peace of these prescription therapies. Pfizer’s tofacitinib, Novartis’s secukinumab, Eli Lilly’s ixekizumab and Amgen brodalumab, Janssen’ Stelara  and Abbott Laboratories’ Humira  dominate on the rest of the psoriasis marketplace.
Will CTIX be able to gain any of those market shares? Hard to speculate for a drug with unknown effectiveness to humans… Evermore, the recent dermatologists’ survey indicated that those doctors would accept a new psoriasis oral therapy product if it priced 50 percent less than Takeda’s Enbrel even with substantial decrease in efficacy compared to it and a higher rate of minor side effects. Prurisol™ does not meet those conditions yet, simply because it does not.

$226MM market cap for a company that may attain just a fraction of percent of the psoriasis prescription therapies market (means, company’s sales would not be more than $30MM/annual if any) is extremely high. We mean it.

On June 21, 2012, the U.S. Food and Drug Administration (“FDA”) approved the Investigational New Drug (IND) application for Kevetrin™, Cellceutix’s anti-cancer compound. The Phase 1 clinical trials will test Kevetrin against a variety of different solid tumor cancer types in patients with advanced-stage cancers. Preliminary study shows that Kevetrin activates p53, a tumor suppressor protein that has an important role in protecting the body. P53 functions by activating proteins that repair DNA and kill cells that have genetic mutations such as in cancers. Kevetrin may help to treat tumors with slowing cancer cell growth and causing cancer cell death.

Key word here is “may“. Phase 1 trials are always about “may“, following by Phase 2s that are on the subject of efficacy (such as “may & may not“). Each trial takes a while; course from these studies to the final stage require years or even decade and could be failed at any clinical stages. Not to mention tens of million dollars to finance these trials.

Just to be fare: market capitalization of most biotech companies with a pipeline similar to CTIX valued at around $100MM. CTIX priced 2.5X over the “standard”. Overvalued? You bet…

Stock offerings were, are and will be a major funding source for CTIX. 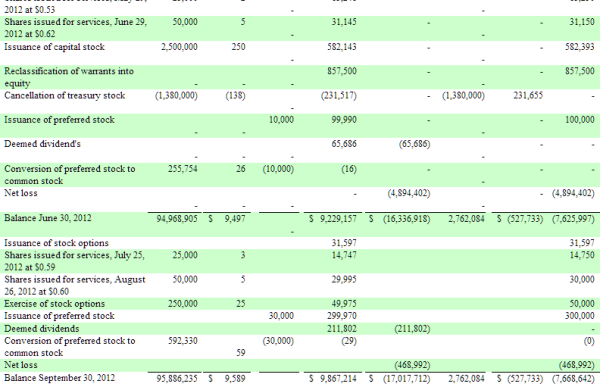 Take into account 40,000,000 warrants that will double CTIX’s float when exercised…

To summarize: CTIX shares reached new 52W high. This is a perfect time for the company and its financiers to “cash-out” previously issued shares or even make a new stock offering. ’nuff said

On December 21, 2012 the Company issued 1,680,000 Class A common shares to a consultant upon exercise of Stock Options granted on December 29, 2010 under the Company’s 2010 Equity Incentive Plan and exercisable at $0.10 per share. The Company received $168,000. The issuance was exempt from registration under Section 4(2) of the Securities Act.

We are short on CTIX & expecting at least 40% in gains for this trade. Happy Trading!